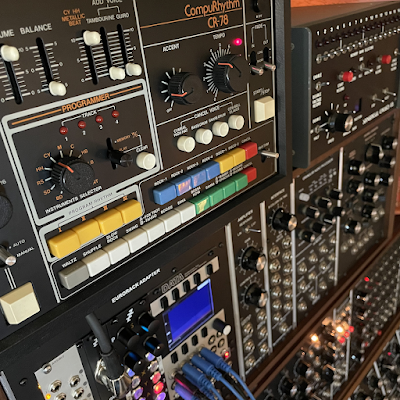 It's great fun interfacing various hardware with your modular synth or your DAW, but some functions might seem like they're off-limits, particularly if you've ever plugged a CV into a footswitch or pedal jack and gotten no response. These jacks might be labeled START/STOP, BYPASS, FILL, etc.
Read on to learn how to gain CV access to these functions using an electronic switch and a DIY ground plug. This is a great first DIY project!

When a typical two-conductor footswitch (latching or momentary) is inserted into one of these jacks and the switch is engaged, the device is expecting to see something that was disconnected become connected, or vice versa. When you engage the switch, you're physically changing something in that part of the circuit to being either connected or shorted to ground.

In modular synth terms, it might be tempting to think of a signal that goes from +5V to 0V to be like saying "Turn off". And while 0V might indeed be related to the device's internal ground reference, it isn't the same thing as physically shorting a connection to ground. So your drum machine might not be responding to your modular synth as you'd expect because it's looking for one thing and you're giving it another.

The trick then is to differentiate between two voltages that we designate as "on" and "off" and convert one of those electronic states into the physical state of being grounded. This can be accomplished with an electronic switch, provided it includes a common jack that connects to one or the other of a pair of I/O jacks. I haven't seen many of these around in the modular synth world, but the Q128 Switch from synthesizers.com is an example of one.

(If you know of others, tell me about them, and I'll list them here!)

[If you're wondering about V-trig vs. S-trig, check out the note at the end of this post.]

Taking the foot out of switch

If a ground plug -- a simple device that even someone with the most modest of soldering skills can make (see more on this below) -- is inserted into the switch's common jack, anything else connected to that jack is also grounded. Thus it's possible to force a physical connection to ground using a control signal, just like pressing a footswitch.

Consider the Roland CR-78 CompuRhythm (photo of its backside below). A tap on a momentary footswitch plugged into the drum machine's START/STOP jack starts the CR-78, and another tap stops it. That's because a tap on the switch briefly shorts the jack to ground. Some other part of the circuit is watching for that state change, and starts or stops the CR-78 accordingly. The VARIATION and WRITE jacks work the same way.

Using a switch like the Q128 mentioned above, the same thing can be accomplished by: 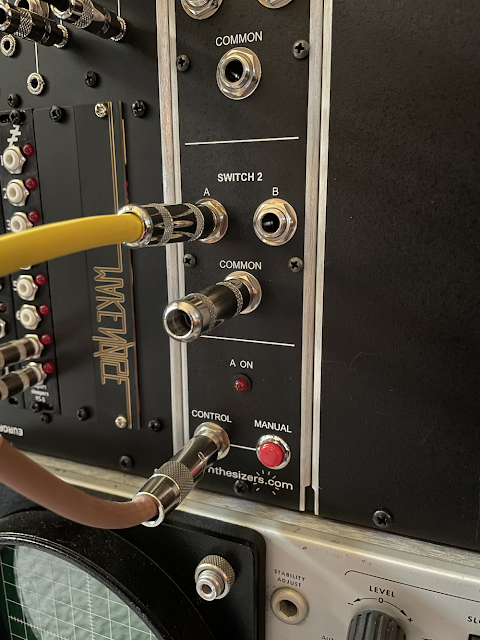 This trick should work to give you CV control of all kinds of unique functions on gear with footswitch jacks. Give it a try and let me know how it goes for you!

It's exceedingly easy to make one. Grab a 1/4" mono (2-conductor / Tip-Sleeve) plug -- the same type used for your modular patch cables. I like to use the Switchcraft 280, but there are others, like the Neutrik NYS225. The same concept applies to 1/8" (3.5mm) patch cables used on Euro systems; a good candidate being the Neutrik NYS226.

Unscrew the housing, and you'll see two metal terminals, probably sheathed within a plastic tube. The tube is an insulator to prevent exposed wire within from touching the housing, which (if it's metal) is part of the Sleeve's connection to ground. Since we intend to short the tip to ground for this plug, the insulator isn't relevant. You can leave it in there when you're finished, or take it out.

The shorter of the two terminals connects to the plug's Tip. The longer terminal has a pair of metal strain-relief flanges at the end used to squeeze and hold the cable, and it's connected to the plug's Sleeve. The goal is to fuse these two terminals together so that the Tip is directly connected to the Sleeve (see the red line in the diagram below).

How you do this really doesn't matter, so long as the two terminals are fused together forming one piece of conducting metal. This is a great first DIY project since it practically invites you to be sloppy. Normally you'd take care to keep the terminals separate, but in this case we want them to be connected.
While your soldering iron heats up, use needle nose pliers (or your fingers) to bend the terminals toward each other so that they're touching even when you let go. You might need to work at bending the longer terminal in a way that still lets you screw the housing back on, but you might save that bit of fine tuning until after the solder work has been completed. If the flanges seem to be getting in the way, you can smash them flat or even clip off the end of the long terminal.
If you have a clamp to hold the plug for the next step, it'll make things easier. But if you don't, wedge the plug against something not-flammable so that it doesn't move (you'll be using both hands for the next part). Orient the plug so that the longer terminal, which is slightly curved to form a trough, is on the bottom. This provides a place for the melted solder to collect.
Apply some heat to where the terminals meet, doing your best to touch your iron to both terminals at the same time. Hold it there a few seconds to let the terminals heat up, and then add a healthy dose (1/2" to 1") of solder to where everything is touching. If the solder doesn't flow when you touch it to the terminals, then either the soldering iron isn't hot enough, or you haven't managed to heat up the terminals enough. Try turning up the heat on the iron to at least 700°F (371°C). There are no sensitive electrical parts to damage, so don't worry about using too much heat.
Let the solder flow around the shorter terminal and into the longer terminal's trough until the shorter terminal is immersed in solder. Remove the iron and then hold still for a few more seconds to let the solder cool. Let the whole assembly cool, and then screw the housing back onto the plug. You now have yourself a ground plug. Congrats!
Here's one that I made. Rather than bending the longer terminal to reach the shorter one, I opted to solder a small piece of wire to bridge the gap. The red colored insulator between Tip and Sleeve was done using a Sharpie to indicate that this plug is "special". Green would have been a better choice (color code for Ground), but this was just for me. This insulator is often black anyway, so depending on your plug you may not have a choice in the matter, 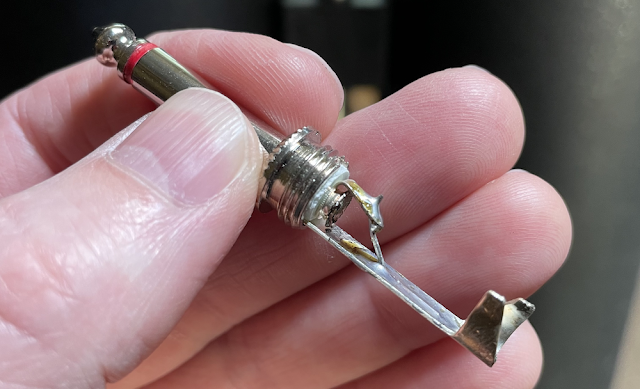 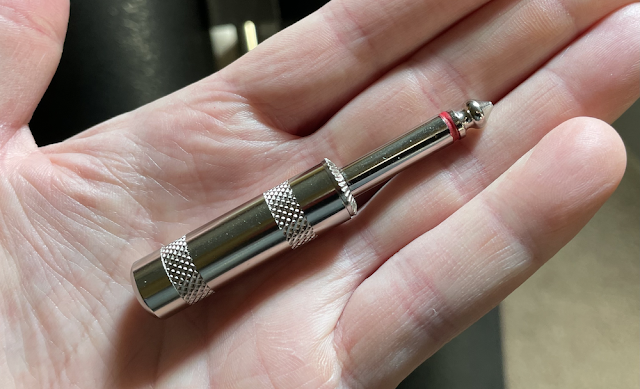 DIY bonus points: Check your work! If you have a multimeter, set it to continuity mode and touch the two probes to the Tip and Sleeve. If the Tip is correctly shorted to Sleeve, you should have continuity (beep!) as long as the two probes are touching any metal at different points on the plug, including the housing.

You may have heard about a special cable that converts voltage gate (V-trig) signals to switch trigger (S-trig) signals (if not, there's a good explanation here). If you have one of these cables and can deal with the Cinch-Jones plug, it may work for your device. Keep in mind though that such a cable is intended to interface between synthesizers that use these opposing trigger types. It's essentially solving the same problem discussed here, but even so the conversion cable may not work with every non-synth instrument.

I tested the conversion circuit in the cable against a variety of devices with footswitch jacks using various trigger sources from my modular and my DAW, and I found that it did not work more often than it did. While that may have more to do with the particular devices I tested than with the converter itself, it's worth saying that the method described in this post has worked with every device I've tried -- even when mixing and matching modular formats in between source and destination.