Don't give up on those old drum machines 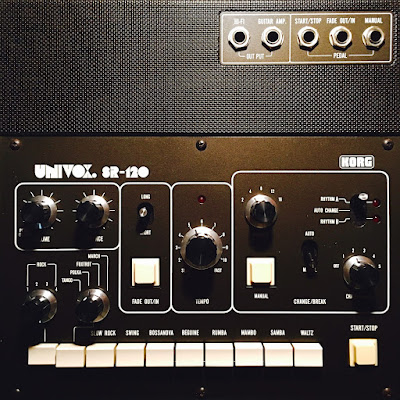 I love old gear. But sometimes parts degrade or stop working and you wish you had a brilliant friend who knows how to find problems and fix them. As it happens, I have such a friend -- one Curtis Rochambeau of Rochambeau Musical Apparatus -- and was stoked when he agreed to come check out my ailing Korg SR-120 drum machine. It wasn't outputting any low end. So no bass drum and no tom sound.

My own suspicion was that some part involved in producing low end sounds was toast: besides there being no bass drum sound in each of the built-in patterns, there was also no bass drum or tom sound happening during fills invoked by the manual change button. Just silence during the hits that should have been there, while the crispy snare and hi-hat continued doing their jobs. But that was the extent of my ability to troubleshoot.

Consulting the service manual (thank you, internet), it was easy enough to spot sections of the circuit that performed certain functions. Well, I say "easy" because those sections were labeled with things like "B.D." (bass drum), "S.D." (snare drum), "Equalizer" and "Power Supply", and so on. But Curtis can look at those diagrams and understand that this chip is doing that, and this cap is needed here for this, and these 100 ohm resistors do that. He quickly identified where the triggers for the various sounds originated, so he used his probe to watch the oscilloscope for electrical triggers being sent from each pin on a particular chip. 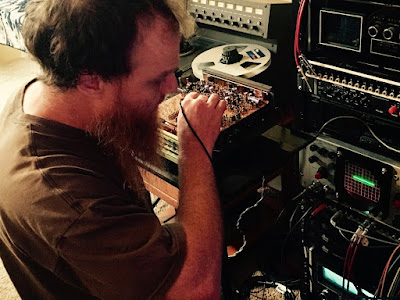 Once Curtis identified the pin for the bass drum trigger, he followed the trace on the circuit board to the point where the received trigger would hit the part responsible for producing the bass drum sound. Except that the trigger wasn't being seen on the other end. At this point Curtis declared, "This should be an easy fix."

He proceeded to flip the circuit board over and back, over and back, following circuit traces with his eyes and fingers, looking for possible reasons why the trigger signal wouldn't be making it to the next hop along the path. "Well, that's no good," he said, pointing to a spot of corrosion at one of the connection points. In fact, there were two or three other spots of corrosion around the board, and they all corresponded to capacitors. Ah, so that's why people have to re-cap old gear after a time...

Curtis scraped away the corrosion from our suspected trouble pin, saying that if the corrosion hadn't eaten away at the circuit trace itself, then he could simply re-solder that spot. As long as the electrical signal could pass that spot, we should see the bass drum trigger downstream. So he gave that a try. Alas, the signal did not pass. He then reluctantly tried to finesse some solder before and after the pin to try to bridge the gap, but that didn't work either. So he undid that, and said, "We could just bypass this cap altogether, and then someday when you re-cap this thing, you can remove the bypass and put the new cap back in play (assuming the trace isn't corroded too)."

He probably explained why we could bypass this particular capacitor, but my arms were getting tired from holding a light for him and my beer was out of reach for the moment. OK, Curtis, so what do we use to bypass the cap? "Just a little wire." Well, since we're ad-libbing here, do I have something lying around the house that could do the trick? "Do you have some CAT-5 network cable? We could steal a wire out of that." 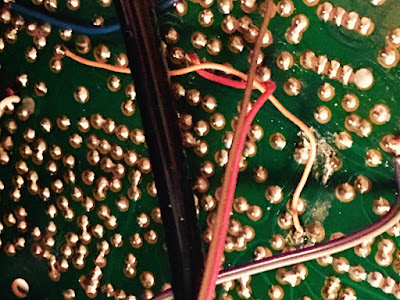 Blip. Blip. That's the sound you make when you just soldered two points, connecting a little wire from point A to point B, bypassing a bad cap. In this photo, the small orange wire is our bypass, and you can see the corrosion at the point where the bypass wire bends to the left.

Thinking about it later, I asked Curtis to explain to me again how he knew he could just bypass that capacitor. He wrote back:

"Most big caps you see are just doing power supply decoupling, so any noise or cycled waveform created by an adjacent circuit does not bleed through the power rails and affect other circuits. They perform this function because they pass AC (signal and noise) while blocking DC, so you strap a cap from the power rail to ground in hopes of limiting the available voltage to just DC. Those 100 ohm resistors separating sections in the power rails provide a small enough "incline" that spurious signal has an easier path through the cap, so it doesn't wander and bother the neighboring sections, so to speak.

"So that cap’s only function is to sluice any noise (or signal, because when a section is generating a wave form it pulls power in a way that reflects the waveform onto the power rail) originating at the bass drum and tom section from rippling out and affecting other sections. But we're dealing with small signals here, not power amp level draw, so the likelihood of the bass drum modulating other sections is minimal - because in order to do so, it would have to pass through the localized filtering supporting the neighboring sections as well. It's kind of a redundant system. Plus, we only know that the power rail was severed at the cap, IF one leg of the power rail is still attached to the cap, the cap is effectively still in circuit after bridging the severed trace. I didn't have tools to measure that on hand, and at the end of day, it sounds awesome - so even if the bass drum is pummeling other sections when it hits, it does so in a musically valid way.

"The caps that really affect the sound of something are either interstage DC blockers (when they leak everything sounds worse), or a tuning/timing constant on an oscillator or filter, but those are rarely electrolytics, and enjoy a much longer lifespan." 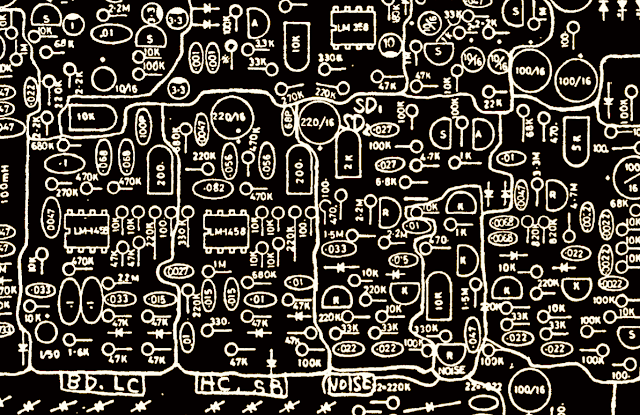