The LED on synthesizers.com's Q106A oscillator cycles as a triangle wave regardless of the shape selected with its waveform selector switch. In LFO mode, I've often wished the LED would follow the shape of the waveform. When the LFO is very slow, it can be hard to tell when the waveform changes direction.

I've grown accustomed to how LEDs on Serge modules accurately track their "action", and it can be really helpful for certain things, especially when you're watching for that LED from across the room.

With the Q106A's LFO outputting square or pulse waves, for example, it'd be handy if the LED snapped on and off rather than slowly fading in and out. Or with a sawtooth wave selected, it'd be great if the LED snapped on with the saw's sharp rise and then slowly faded with the saw's descent. So I asked James at synthesizers.com if there's any circuitry on the Q106A that could be co-opted for this purpose.

James said he'd do some digging/experimentation and get back to me. I've not heard many anecdotes of synthesizers.com encouraging DIY work on their stuff, so I was surprised and delighted by his response:

"The PCB can be modified so that the selection on the Wave Range Switch drives the LED. So the LED will follow the [shape] of whatever waveform that switch is set to. Note that this is really only useful at low frequencies. Most of the time the LED will look the same." 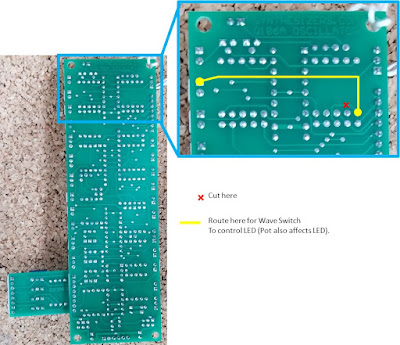 He offered to draw up a how-to for me, which I enthusiastically accepted. He then sent this annotated picture which shows "the cut and re-route that needs to be done for the LED to respond to the selected waveform. In this case the LED will respond to the Waves Attenuator as well. If the attenuator is off (0) then the LED might be on or it might be off... It depends on the tolerances in one of the op-amps."

Having previously converted my Q106 oscillators to the Q106A flavor, I've been in the guts of these modules before and knew I was looking at labeling and disconnecting everything attached to the PCB in order to remove it. I used low-tack painter's tape to label each of the connectors so that the tape would be easy to remove. 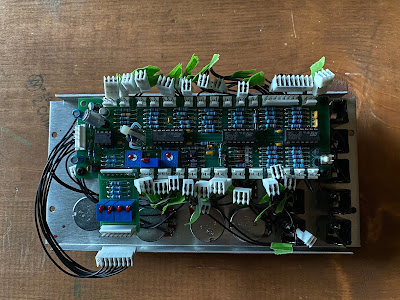 With the PCB freed from the panel, a sharp knife made short work of the single trace that needed to be cut. For the solder work I used a PCB clamp to hold things steady and helping hands to position the piece of wire I'd be using to bridge the two connection points indicated in James' diagram.

Once the other end of the wire was soldered into place I confirmed continuity between the resistor leg and header pin (on the other side of the PCB) that corresponded to my new connection points. With that done, all that was left was reattaching everything. 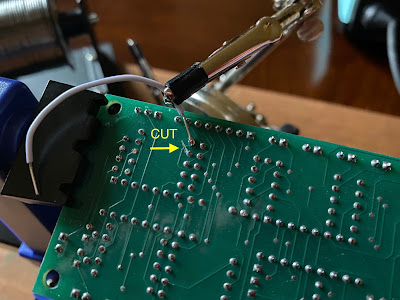 With the right tools (namely the PCB holder and helping hands), the mod itself is a breeze, even for a novice solderer. The hardest part is having the patience to label the connectors before pulling it all apart.

This mod doesn't change the functionality of the oscillator in any way. It merely changes the LED behavior to provide better visual feedback when using the oscillator as an LFO. Within the "Waves" section of the module, the +/- outputs and the LED will follow the wave shape selected by the switch. And since the individual outputs at the bottom of the module are not connected to the wave selector switch, the patched output can be one shape while the LED displays another.

I've performed this mod on all of my Q106A oscillators. It feels like my 5U modular synth just got another really cool upgrade. Thank you, James and synthesizers.com! 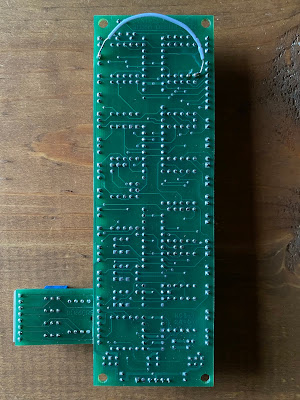 Here's the mod in action -- cycling through the Q106a's wave shapes in LFO mode: