I recently completed a mod on one of my more interesting synth modules: The Klee Sequencer.

The mod changes how its clock input LED reports incoming clock pulses. I came up with the idea for the mod, but all credit for figuring out how to implement it goes to Phil Petschke of MegaOhm Audio, who built my Klee. Phil is great to work with, and the build quality of his modules is top-notch. 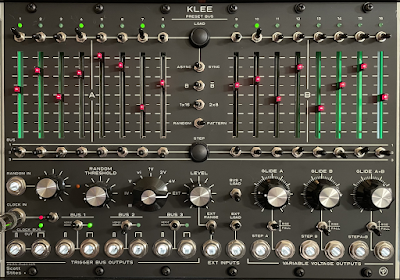 At the lower left in the photo is the clock input and a couple LEDs next to it. One indicates that clock is being received, and the other indicates the presence of the clock signal on the master gate bus. There are additional LEDs for each of the numbered gate busses.

I can't speak authoritatively as to whether the behavior I describe below applies to every Klee out there. But if your Klee has separate LEDs for the Clock Input and the Master Gate Bus (or whatever your Klee calls these), then this info probably applies.

The Clock input responds to any length of trigger or gate, and the on time of the two LEDs next to it reflects said length. However -- and this is the behavior that I wanted to change -- both LEDs show the same thing all the time.

I proposed a mod to Phil to have the clock input LED show a short pulse regardless of the length of the incoming clock pulse. Meanwhile the master gate bus LED and the numbered bus LEDs would continue to exhibit their native behavior, which is to reflect the output gate length.

Phil got back to me with a way it could be done. He breadboarded it with his Klee and sent the details to me to test it out myself. He later said that he liked this mod and that he was considering implementing it on his own Klee!

Here's the portion of the circuit being modded (this is from the Klee build doc version 1.22 -- see the "Clock and Load" page for the Digital Board): 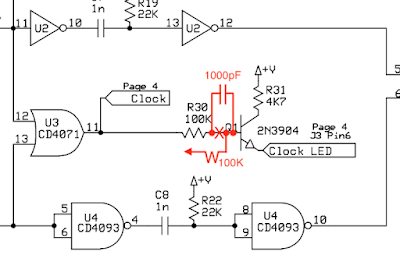 "If you fit a small cap in series with the 100K resistor that drives the base of Q1, the cap will give you a fixed pulse length and turn gate signals into trigger signals that drive the LED.

"You could try lifting one end of R30 (100K) between [it and] Q1. Wire a cap to the resistor end and connect the other end of the cap to the base of Q1. Also connect a 100K resistor from the base of Q1 to ground as a discharge path for the cap.

"You will probably want to play around with the cap value too. That will change the trigger width. 1nF (1000pF) would be good to try. Ceramic or poly shouldn't make too much difference since it is only driving an LED.

"I think this is a cool mod and I would have designed it into the panel pcb if I would have thought of it. It just makes more sense."

Phil sent a photo of his breadboard setup where he replicated the clock LED portion of the circuit for testing, and I've annotated it here (side note: per Phil, the value of R31 was actually 4.42K. I used 4.7K for my own testing since that's what I had on hand, and I indicated that value here since that's the value on the build schematic): 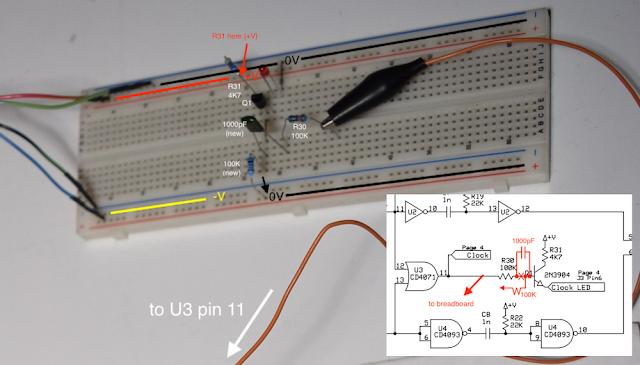 Once I replicated Phil's breadboard setup on my own, I clipped an oscilloscope probe to Q1's emitter to monitor the length of the triggers that we were trying to fine tune. 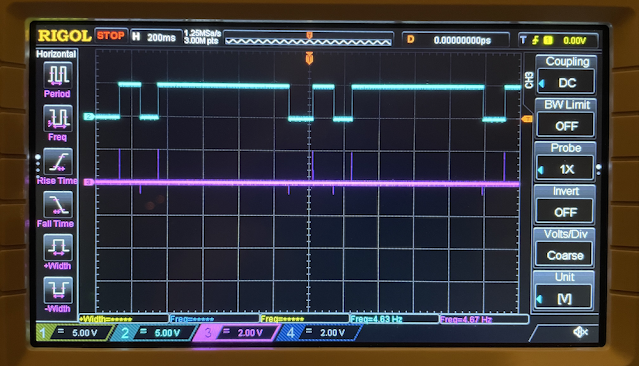 On my breadboard the clock LED was just a quick blip, which was what I was going for. The brightness was different than I was expecting, but I kept in mind what Phil had said:

"If you don't have a 4.42K resistor on hand (it is an odd value!) no problem. This resistor determines brightness so use a 4.7K, 10K, anything in the ball park. This parallel circuit is meant to experiment with the pulse on time so brightness doesn't matter. Once the mod is in place you will have the original brightness."

Here's a view of the PCB diagram where the cut and new components are added. Note that the resistor to ground has a couple convenient places to land (I opted for R26): 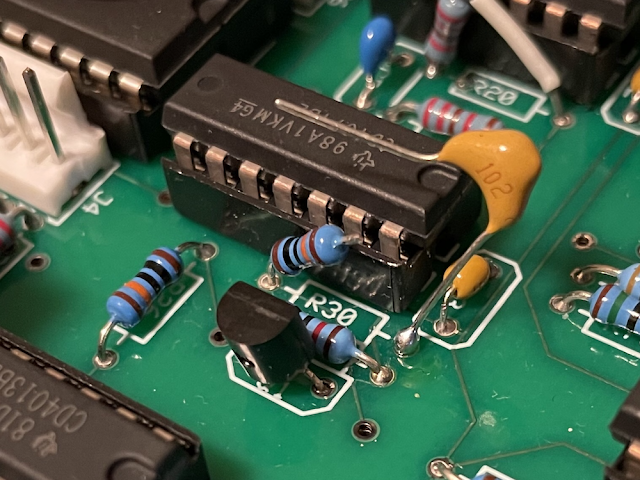 R30 connected to cap, and new resistor to ground added: 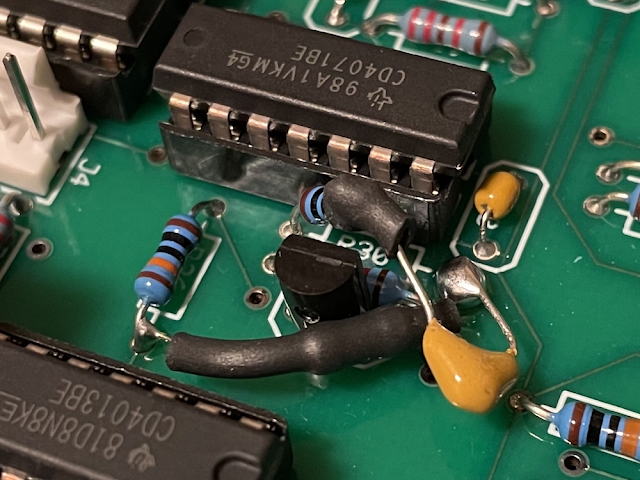 With the cables all put back, they even provide some protection to the modded zone: 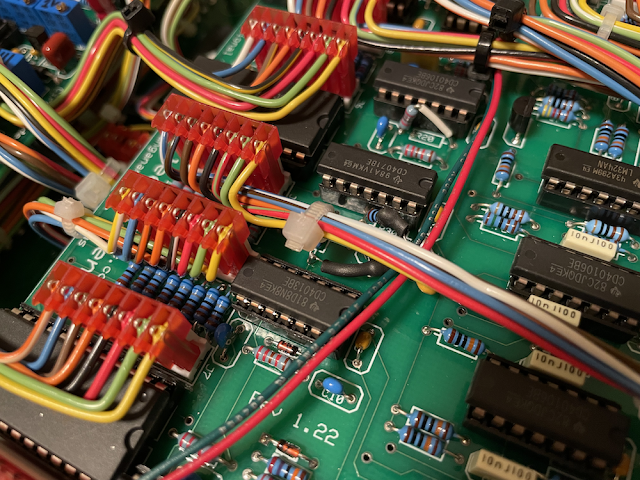 And it works great! With the 1000pF cap value, the clock LED's on time is only 0.2ms (as measured on my scope), which is barely enough time for it to illuminate at all. But given its close proximity to the LED just below it and the fact that it’s still a little bit redundant to even have a clock “receipt” LED when the green clock bus LEDs are already confirmation enough, that actually seems OK.

Regardless, having the two LEDs reporting different things does somehow make the Clock and Gate Bus relationship feel more dynamic. Thank you, Phil!

Here's the mod in action: